The union movement has long understood that the building of diverse progressive coalitions is critical to virtually every aspect of labor’s mission whether it is workplace organizing, issue advocacy or the overall fight for social and economic justice.

Today, the unanimous adoption of “Resolution 16: Building Enduring Labor-Community Partnerships” during the 2013 AFL-CIO Convention is a milestone event in labor history which will unite the efforts of labor and community allies as never before. 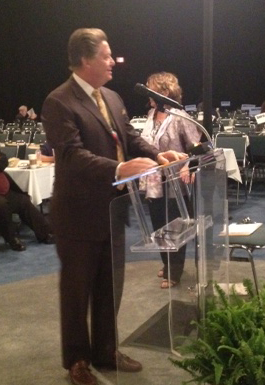 New Jersey State AFL-CIO President Charles Wowkanech was the featured speaker for Resolution 16 and served on the specially established “Community Partnership and Grassroots Power Committee”. During his remarks he provided evidence of how labor-community partnerships successfully brought about progressive changes to state laws as well as New Jersey’s communities. This includes the historic enactment of Paid Family Leave and a grassroots mobilization effort which fought against building a Walmart in Newark and ultimately paved the way for a ShopRite which will be built by building trades unions with a Project Labor Agreement and staffed by members of UFCW, thus representing a win-win for unions and the community which will benefit from good family sustaining jobs.
As a founding partner of Working Families United for New Jersey, Inc., a non-partisan grassroots coalition consisting of various progressive community groups, the New Jersey State AFL-CIO has experienced first-hand the benefits of building labor-community partnerships. The national AFL-CIO’s recognition of the State Federation is a tribute to the hard work of labor and community allies in New Jersey. We look forward to continuing our work together in our state and unlocking the full potential of labor-community partnerships across the entire labor movement around the country.
CLICK HERE to view the full text of Resolution 16.
general news media
Do you like this post?
Tweet