Workers Memorial Day 2014: Mourn for the Dead, Fight for the Living

The following letter-to-the-editor from New Jersey State AFL-CIO President Charles Wowkanech is being published in newspapers across the state:

Every year, on April 28, the labor movement pauses in solemn recognition of Workers Memorial Day. We remember the working men and women whose lives were needlessly cut short due to workplace hazards and inadequate safety precautions, and those who suffered on-the-job injuries. 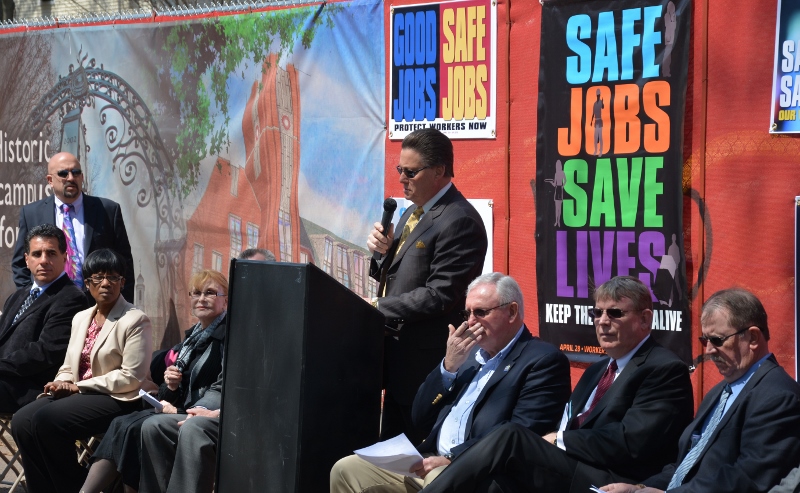 Sadly, many of these accidents could have been prevented had existing workplace safety rules and regulations been followed. And, our continuing economic challenges have made it too easy to put the need for productivity ahead of the need for safety. Our communities are being protected by fewer police, fire, and emergency personnel who must still patrol and respond to every call that comes in. In businesses around the state, jobs have been cut yet the remaining workforce is expected to produce the same as before, putting them at greater risk.

Across New Jersey in 2013, 37 workers were killed while simply doing their jobs. And while the number of workplace fatalities has dropped over the past several years, even one death is one too many and we shouldn’t be satisfied until the number is zero. Nationwide, an average of roughly 13 workers die each and every day, according to data from the Occupational Safety and Health Administration (OSHA). Yet, there are some in Washington who would put workplace safety programs on the chopping block.

On April 28, of all days, we must stop and ask if we’re really doing all we can do to make our workplaces safer. New Jersey has some of the strongest workplace safety laws in the nation, yet workers are still killed and injured on the job. As union members,especially, we have a responsibility to be leaders in ensuring every worker is provided the greatest level of safety and security on the job.

Every worker in New Jersey should have the basic guarantee of being able to make it home to their families at the end of the day. Forty years after the enactment of OSHA, we still have far to go.

As the historic labor leader Mother Jones once said, “Mourn for the dead, but fight like hell for the living.” Let’s renew ourselves to this simple idea.